by Darlene Ganong
Each year the breeding season is filled with the excitement of welcoming the new arrivals and the accompanying stress related to the concern that everyone lands safely.  I have been breeding and foaling for over 25 years and when you “think” you’ve seen everything, Mother Nature decides to throw you a curve ball!!  I hope you enjoy this story about my wonderful Hanoverian mare, Faelyn (Fabuleux x Finalee/ Westpoint), who gave birth to twin foals this year, and find it touching as well as educational and inspirational.

May 2011
I made the decision to breed my maiden Hanoverian mare, Faelyn, to Banderas because they both have superb jumping technique, with the hope that the resulting foal would be a very good hunter/ jumper with an exceptional pedigree. Fae was inseminated once in May and confirmed in foal on day 14. We followed up with additional ultrasounds on day 26, 35 and 50, and everything looked great. Suddenly in August, Fae became very sore in her front feet. She had no pronounced pulses or heat and we thought perhaps it was due to the dry summer and hard ground. As the days went by, Fae became more sore and began to uncharacteristically lay down each day. After a few weeks, she became so sore that she would not leave her stall and didn’t get up to drink. I phoned my vet and asked him to come and examine her and give her fluids. We spoke at length about possible causes of her soreness, identifying that the only change was Fae was pregnant. My vet recommended running four 5 liter bags of LCR with 100 ml of DMSO along with IV Bute knowing full well that neither of these agents should be administered to a pregnant mare. However, the recovery of my mare was most important and I thought if she lost the pregnancy, I could always breed her back next year. After the first IV bag started running, an abscess popped on her front left foot…after the second bag, she popped another abscess on her front right foot and by the time the last bag was almost finished, she popped another on her hind right!! WOW… three abscesses… no wonder she was so sore!! Although we were relieved that we found the cause of her discomfort, we were faced with ongoing abscesses for several more months. I was now getting worried because she was getting heavier with the pregnancy and knew how stressed she would be carrying the extra weight. I spoke to a vet in Kentucky and he advised me to soak her feet in Clean Trax, as a last resort. This now takes us to January and after the Clean Trax treatment, the abscesses were gone! Everything seemed to settle down and Fae was happy and comfortable and the foal was getting larger by the week. We couldn’t believe she was still in foal hoping every day the foal would be born without birth defects and anxiously awaiting her April 10th due date.

April 2012
Fae carried 12 days over her due date and on April 23rd at 12:10 A.M., she laid down to deliver her much awaited foal. I called my friends, Denise and Erika, who were on standby to help out with the delivery. Everything was progressing like any normal delivery and Fae presented us with a lovely dark bay filly around 12:30 A.M. Denise and Erika were rubbing the foal and I was checking Fae to make sure she was fine. At that point, we were all happy and relieved that the delivery was text-book. I got up to get more towels and as I reached the stall door Erika and Denise told me to come back…. Fae was delivering another foal! Another amniotic sack was being presented, then all of a sudden the entire placenta came out and we were faced with a “Red Bag.” I quickly began tearing the placenta and we found front legs… Denise grabbed the foal’s legs and pulled her out quickly… the foal was almost air bound. When we looked at this foal, she wasn’t moving and we thought she was dead. We quickly began to rub her and she took a breath and opened her eyes…. OMG, she was alive but very small at only about 40 lbs. We immediately thought this foal is not going to survive. Denise and Erika looked at me and said “now what” and for one fleeting minute, I said “I don’t know” as I was in total shock. Thankfully, my brain came back quickly and we immediately got Fae up and started pulling colostrum and feeding the twins from a bottle, starting with the small filly. Both drank eagerly from the bottle and we proceeded like we always do after a foal is born, the only difference being we now had two! We got the larger foal up (Bianca) and she latched on quickly to Fae and started nursing. However, the little filly (Bijou – aka Barbie) was not tall enough to nurse and was very crooked in her hind legs. Erika attended to Bianca and Denise took over with little Barbie. She slung a towel around her belly and over her back creating a handle of sorts to aid her while she walked around the stall, gaining strength with every step. Barbie was a little trooper and went along with the flow – she didn’t want to lie down – she just kept walking on! As we continued with the process and the foals settled, we knew the next few weeks would be critical, especially for the small filly. I slept in the stall that night and pulled milk from Fae to feed little Barbie throughout the evening. 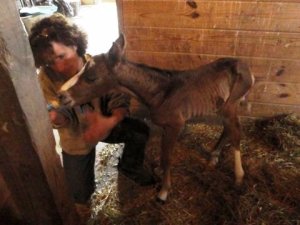 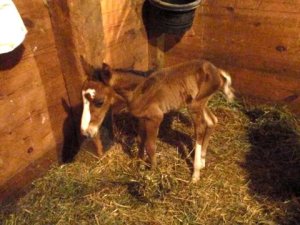 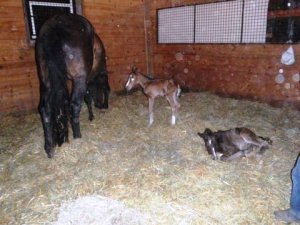 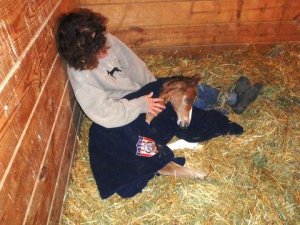 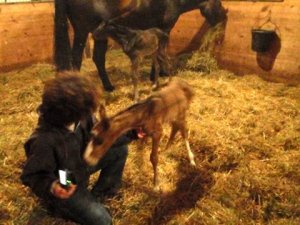 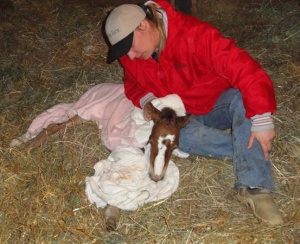 I phoned a feed store early Monday morning and picked up Buckeye Mare’s Milk Replacer for Barbie, which she not only willingly accepted, but after finishing the first bottle, she asked for another!! We purchased a few blankets (actually dog blankets because she was so little) because she could not maintain her body temperature. Amazingly, so far, she was doing everything a normal foal does at day 1. By day 2, Fae really needed to go outside, so we put blankets on both foals and turned them out in a small paddock. Bianca followed Mom like a normal foal would do, but Barbie followed her “humans” because she knew we had her bottle. I slept in the stall at night and Barbie would lay next to me like a puppy, getting me up by nudging my face when she was hungry, which was about ever hour. This went on for about 11 days, but I started to notice that every time she finished her bottles, she would stand under Fae knowing she should be doing something else, and of course, watching big sister Bianca nursing. All of a sudden, she latched on and a huge sense of relief came upon me. We continued to offer her a bottle frequently and there were days she would take it and others when she snubbed it. By day 14, Barbie wanted no part of a bottle!! At this point, everything looked super… she was nursing from Mom, was maintaining her body temperature and her hind legs were straightening. 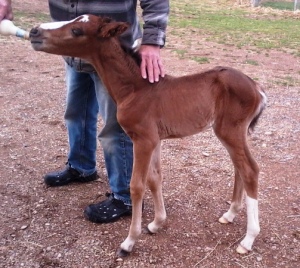 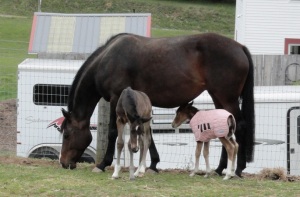 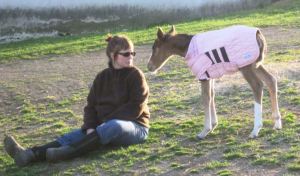 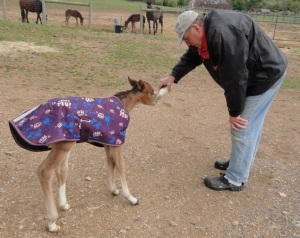 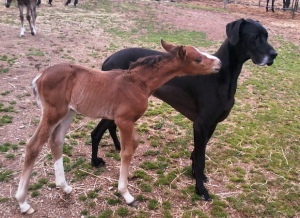 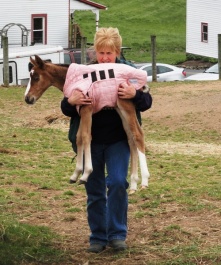 At a month old we saw her front right leg beginning to bow inward because of over compensating for the hind at birth. It was subtle at first, but got worse by the day. I immediately started her on the Progressive Rejuvenaide Paste and we were also supplementing the filly’s with the Progressive Creep feed. In addition, I had my farrier trim her feet every other week. A few more weeks went by and both my farrier and vet recommended periosteal stripping. Even though I wasn’t quite convinced this would be the way to go, I did make the appointment on a Thursday to have the procedure done. I checked the weather the day before the procedure and found it was going to be hot… almost 100 degrees! I decided that it would be too stressful to ship Mom and two foals, so I postponed it for the next Thursday. A few days later, I noticed her leg seemed to be a bit straighter, but thought that perhaps it was because I wanted to think it was improving. As we approached the next appointment, I received a call from my neighbor who cuts our hay, informing me that he would be here that week and Thursday was the day the hay would have to be brought in the barn. So again, I cancelled the appointment for the stripping. During this time, however, it became obvious that Barbie’s leg was truly getting straighter and straighter every day. By now I was convinced that she was going to be able to fix her leg all by herself. By the time she was 4 months old, her knee was straight and she was turning out just very slightly from her pastern. Barbie did everything herself from the time she was an embryo growing in her Mother. She hung on even though her big sister was taking most of the nourishment, was born at 40 lbs., straightened her legs and grew into the loveliest filly one can imagine. Her will is amazing!! 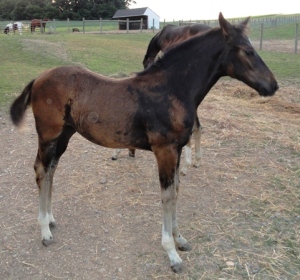 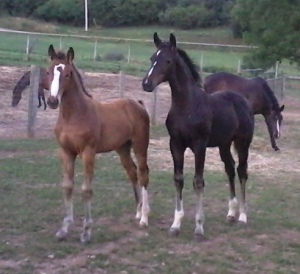 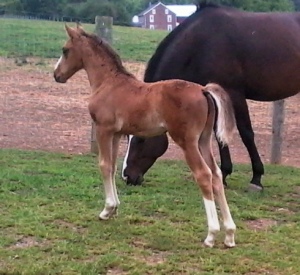 We took Barbie and Bianca to their GOV Inspection when they were 4 months old and needless to say, they were a hit! Bianca earned a premium status and everyone wanted to take Barbie home!! Holly Simensen spoke very kind words about their overall health and beauty and complimented us for the outstanding care we provided. She also commented that she had seen other twins before and Barbie and Bianca were the best she had ever seen!
I feel truly blessed that everything turned out this well as I know this birth could have been a train wreck and the foals, along with my mare, could have all been lost. It was an experience I will never forget and one that I hope will not happen again!! 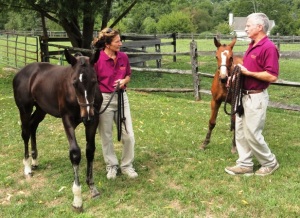 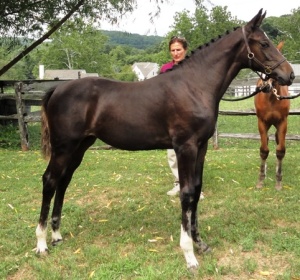 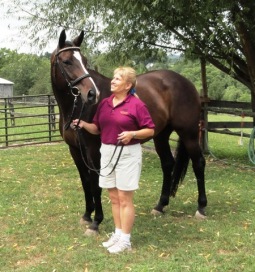 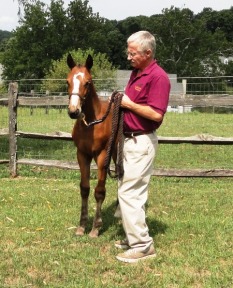 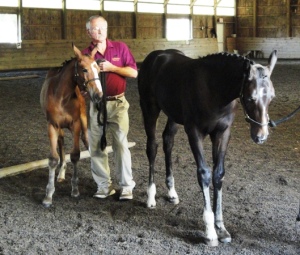 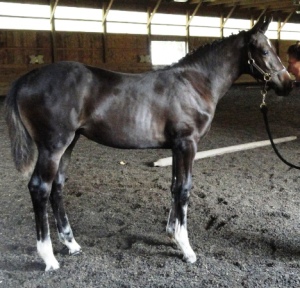 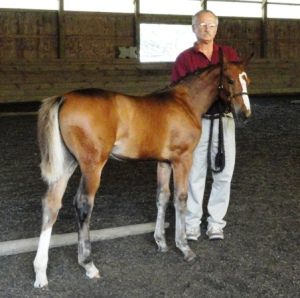 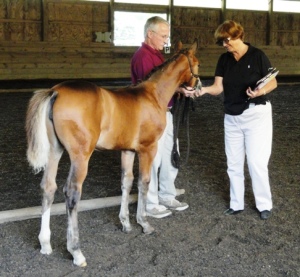 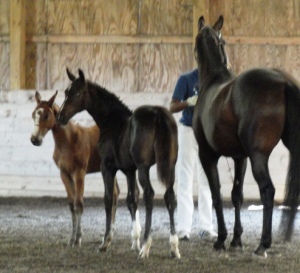 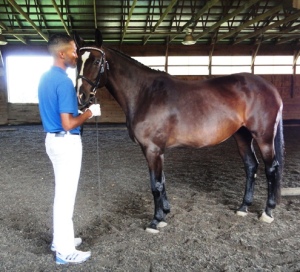 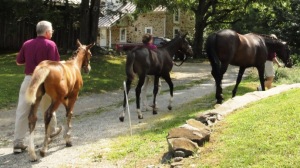 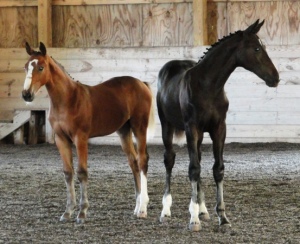 Team Twins
I would like to take this opportunity to thank everyone who was instrumental in the foals’ survival as I could not have done this alone. The support and love was abundant and I am truly grateful to have such wonderful friends who were a part of “Team Twins”!! 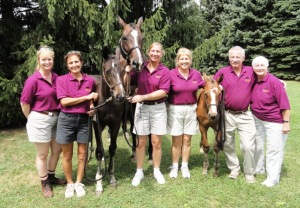